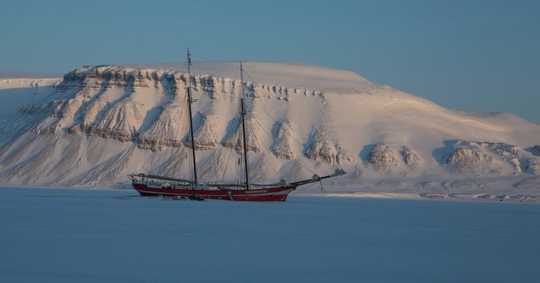 Thanks to a natural sea temperature cycle, a Pacific climate wobble, the Arctic Ocean could be ice-free in the summer in a decade or two.

Sunlit skies and bright blue water could come earlier to the Arctic – much earlier, thanks to a distant Pacific climate wobble.

Scientists now think that the Arctic Ocean could be effectively ice-free within the next 20 years, opening it to sea lanes across the polar waters between Europe, the US and east Asia.

Climate researchers have repeatedly warned, in the last two decades, that because of global warming the ice sheet that masks the Arctic Ocean has been thinning and could in effect vanish altogether in summertime by 2050.

New research has brought forward the prediction date. And this time the effective agency is not just global warming driven by profligate combustion of fossil fuels worldwide, but a natural cyclic phenomenon known to oceanographers as the interdecadal Pacific oscillation, or IPO.

Over a cycle of between one to three decades, the average ocean temperatures of the north Pacific shift up or down by about 0.5°C.

And a new study in the journal Geophysical Research Letters pinpoints the state of the present cycle: the Pacific ended its cold phase and started to warm up about five years ago.

James Screen of the University of Exeter, UK, and a colleague used computer modelling to merge the continuous upward rise in global average temperatures as a consequence of the build-up of greenhouse gases in the atmosphere with the pattern of predicted natural change in ocean surface temperatures to identify the moment when the summer ice will have melted.

The phrase “ice-free” is not a simple one, because some sea ice always remains, but oceanographers and glaciologists have their own definition: it happens when the area of summer sea ice falls below a million square kilometres.

And this is now likely to happen some time between 2030 and 2050. Any argument is not about if, but when. The Arctic is just about the fastest-warming region of the planet, and in 2016 polar sea ice in both hemispheres  reached a record low: an area of ice the size of Mexico was lost.

Temperatures in the Arctic were recorded as up to 20°C above the average for some of the winter months. The long-term consequences are unpredictable, but since both ocean current and air movement are driven by the difference between equatorial and polar temperatures, dramatic climate change is likely to follow.

“The trajectory is towards becoming ice-free in the summer, but there is uncertainty as to when that is going to occur,” Dr Screen said.

“You can hedge your bets. The shift in the IPO means there’s more chance of it being on the earlier end of that window than the later end.” – Climate News Network