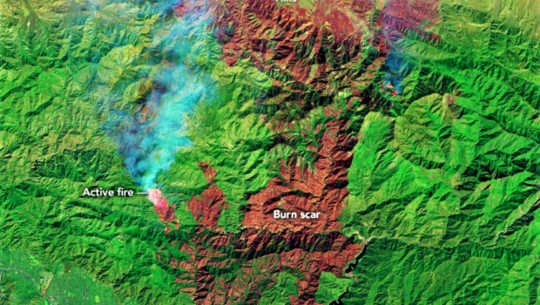 Originally published on the blog of the Union of Concerned Scientists.

Editor’s note: This post has been revised to reflect the most accurate data on fire acreage in the 1980s. The original relied on data from the NIFC for 1980–1983 and the updated version excludes this period, as the data are less reliable. The 1980s statistics now reflect data from MTBS and CalFire.

"Wildfires in this single year alone have burned more of California’s land than they did in the entire first decade of reliable recordkeeping (1984-1993). And nearly as much as the entire decade of the 1990s. And the year is not over." #CaliforniaFires https://t.co/I2t9dc0B6i

California is a state that burns. Like epic snowstorms in Tahoe, fog in San Francisco, and the dry heat of Palm Springs, wildfires are a natural feature of California’s climate — and like all of those, wildfire is changing because of global warming. Rising temperatures are drying out soils, plants, and forests, which then act as fuel for increasingly large fires.

When you’re far from the fires, or when their smoke isn’t cloaking your neighborhood, it can be difficult to conceive of their scale. Here are nine graphics that put this year’s fires into context.

More than 8,200 wildfires have burned "well over" 4 million acres in California this year, killing 31 people and destroying 8,450-plus structures, Cal Fire confirmed todayhttps://t.co/FUzZT5cNo4