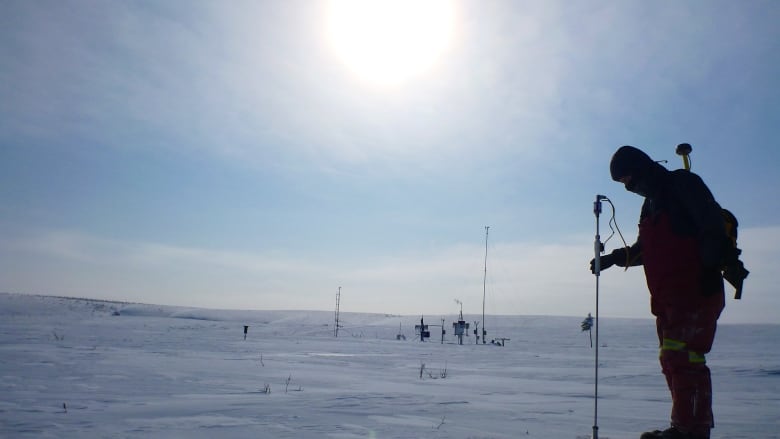 A researcher uses a probe to measure snow depth in the Northwest Territories. A new report shows that North America has been losing billions of tonnes of snow a year over the past few decades, but not Eurasia. (Peter Toose/Environment and Climate Change Canada)

You may have noticed that we're getting less snow in winter as the climate warms. But how much? The latest estimate is that the maximum amount of snow that collects on the ground each year in non-alpine areas of North America has been decreasing by 46 billion tonnes per decade since 1980, a new study reports. But interestingly, Eurasia's annual snow has held steady.

The total amount of snow that falls, or the "snow mass" is important for all kinds of planning because it's the amount of water released in the spring when the snow melts, says Chris Derksen, a research scientist at Environment and Climate Change Canada who co-authored the study published Wednesday in Nature.

"So this is the water that's available for hydropower generation, for human consumption," he said. "It's also the snow melt that can provide a hazard through spring floods."

Because of that, knowing snow mass is important for managing reservoir levels and mitigating floods.