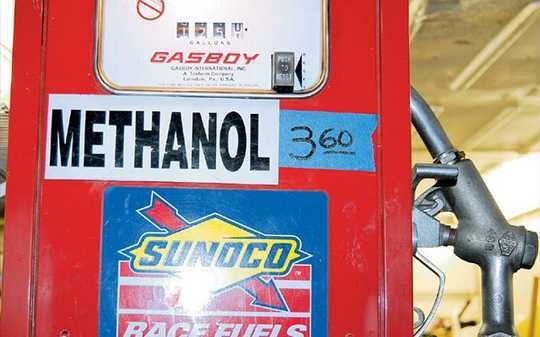 The global economy still relies on the fossil carbon sources of petroleum, natural gas, and coal, not just to produce fuel, but also as a raw material the chemical industry uses to manufacture plastics and countless other chemical compounds.

Although efforts have been made for some time to find ways of manufacturing liquid fuels and chemical products from alternative, sustainable resources, these have not yet progressed beyond niche applications.

Methanol is regarded as a commodity or bulk chemical. It is possible to convert it into fuels and a wide variety of chemical products, including those that today are mainly based on fossil resources. Moreover, methanol itself has potential as a propellant, in methanol fuel cells, for example.

The core of the new approach is a chemical catalyst based on indium oxide, which Javier Pérez-Ramírez, professor of catalysis engineering at ETH Zurich, and his team developed. Just a few years ago, the team successfully demonstrated in experiments that indium oxide was capable of catalyzing the necessary chemical reaction.

At the time, it was encouraging that doing so generated virtually only methanol and almost no byproducts other than water. The catalyst also proved to be highly stable. However, indium oxide was not sufficiently active as a catalyst; the large quantities needed prevent it from being a commercially viable option.

The team of scientists have now succeeded in boosting the activity of the catalyst significantly, without affecting its selectivity or stability. To do this, the researchers treated the indium oxide with a small quantity of palladium.

“More specifically, we insert some single palladium atoms into the crystal lattice structure of the indium oxide, which anchor further palladium atoms to its surface, generating tiny clusters that are essential for the remarkable performance,” explains Cecilia Mondelli, a lecturer in Pérez-Ramírez’s group. Pérez-Ramírez points out that, with the aid of advanced analytical and theoretical methods, catalysis may now be considered nanotechnology, and in fact, the project clearly shows this to be the case.

This CO2 may come from the atmosphere or—more simply and efficiently—from the exhaust combustion power plants discharge. Even if fuels are synthesized from the methanol and subsequently combusted, the CO2 is recycled and thus the carbon cycle is closed.

Producing the second raw material, hydrogen, requires electricity. The scientists point out, however, that if this electricity comes from renewable sources such as wind, solar, or hydropower energy, it can be used to make sustainable methanol and thus sustainable chemicals and fuels.

Compared to other methods that produce green fuels, Pérez-Ramírez continues, this technology has the great advantage that it is almost ready for the market.

ETH Zurich and French oil and gas company Total have jointly filed a patent for the technology. Total now plans to scale up the approach and potentially implement the technology in a demonstration unit over the next few years.