The Climate Solution Right Under Our Feet 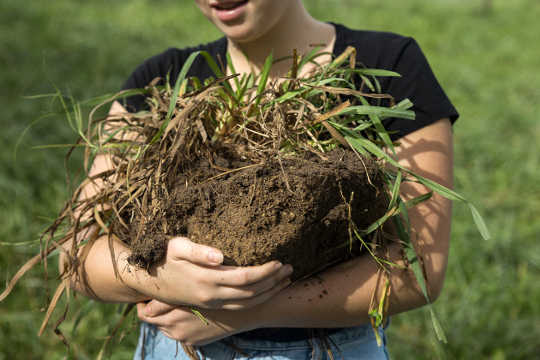 The ideas behind regenerative farming are simple and ancient.

The way to stop climate change might be buried in 300 square feet of earth in the Venice neighborhood of Los ­Angeles, amid kale and potatoes. A half-dozen city youth are digging through the raised bed on a quiet side street, planting tomato seedlings between peach and lime trees. Nineteen-year-old ­Calvin sweats as he works the rake. There’s a lot at stake here. The formerly homeless youngsters are tentatively exploring farming through a community outreach program started by a California nonprofit called Kiss the Ground. More importantly, they are tending to the future of our planet.

“Soil just might save us,” filmmaker Josh Tickell says, “but we are going to have to save it first.” He wrote that in his 2017 book, also called Kiss the Ground, after becoming deeply invested in the potential of soil to reverse climate change. (The nonprofit supports the book and Tickell’s upcoming documentary about it, though he has no role with the organization.) He has experienced both soil and climate change intimately. He started to work on farms more than two decades ago for World Wide Opportunities on Organic Farms, and in 2017 he and his family had to leave their home in Ojai, fleeing devastating wildfires.

Even as most of the world works to reduce emissions, new studies confirm that it will be impossible to stop climate change without changing agriculture. Soil degradation is slowly turning a third of the world into desert. At this rate, fertile soil will be depleted in 60 years.

What exactly does soil have to do with climate change? In the atmosphere, too much carbon overheats the climate. But in the ground, carbon is useful.

Loss of topsoil releases carbon into the air. Modern petroleum-fueled agriculture, beginning around 1930, has released 50 to 70 percent of soil’s carbon into the atmosphere. In a report last year, the U.N. warned that the concentration of carbon dioxide in the atmosphere increased at record speed to hit a level not seen for more than 3 million years.

“The irony is that bringing carbon into the soil solves multiple global problems,” Tickell says in Kiss the Ground. “It reduces carbon dioxide in the atmosphere, it increases the fertility of the soil, it helps farmers grow more, and it allows the oceans to release the CO2 that threatens to acidify the phytoplankton that produce so much of the oxygen we breathe.”

And there’s a simple way to get it into the ground. Instead of complicated bioengineering projects that attempt to trap carbon underground, initiatives such as Kiss the Ground’s propose that the best machines for binding the carbon in the ground already exist: plants.

“They break the CO2 from the atmosphere down into its components and sequester the carbon in the soil,” explains Don Smith, the organization’s research director. Modern agriculture that is focused on industrial efficiencies and profits disturbs this natural process, mainly through tilling, monocultures, and overuse of synthetic chemicals. “But methods such as composting, perennial plants, and biodiversity help regenerate the soil.”

The idea behind regenerative farming is simple and ancient: The mother soil, which nurtures the harvest, in turn has to be nurtured and protected.

“The [plants] use sunlight as energy, pull the carbon dioxide out of the atmosphere, turn it into carbon fuel, and that’s how they grow,” explains The Soil Will Save Us author Kristin Ohlson in Tickell’s documentary. “They send 40 percent of that carbon fuel down to their roots, and that’s one of the ways carbon gets fixed in soil.”

Researchers for the French government estimate that the Earth can sequester 6 gigatons of CO2 in the soil yearly through planting the right kind of crops, thus compensating for the 4.3 gigatons of CO2 humanity emits into the atmosphere every year.

How realistic is this? Whendee Silver, lead researcher for the Marin Carbon Project and an ecosystem ecologist at the University of California, Berkeley, has calculated that if as little as 5 percent of California’s rangelands were coated with a thin layer of compost, the resulting carbon sequestration would offset the annual greenhouse emissions of 6 million cars.

In the Santa Ynez Valley, the Ted Chamberlin Ranch became the first ranch in Southern California to implement a large-scale carbon farming plan. A quarter-inch layer of compost applied two years ago increased the grazing land’s capacity to hold water, and grass production increased 24 percent. These kinds of results give ranchers and farmers economic incentive to help sequester carbon. 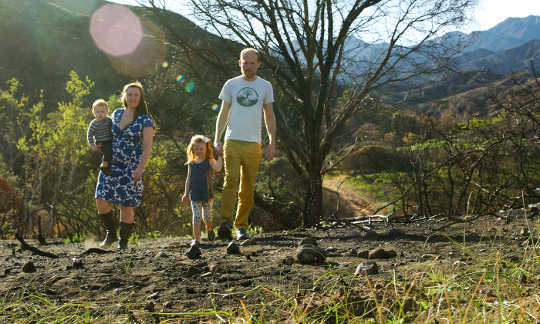 Josh Tickell has experienced both soil and climate change intimately. He’s worked on farms for more than two decades, and in 2017 he and his family fled the devastating wildfires in Ojai. Photo from Kiss the Ground.

In fact, ranchers all over the country who shift to carbon farming find impressive results. Decades ago, in Bismarck, North Dakota, Gabe Brown had almost lost his ranch after several years of drought. He was able to turn it profitable again by working with natural systems, such as abandoning tilling, which disrupts soil. “We have now eliminated the use of synthetic fertilizers, fungicides, and pesticides. We use minimal herbicide and are striving to eliminate it,” the Brown’s ranch website states. “We do not use GMOs or glyphosate. Our ever-evolving grazing strategy allows most of our pastures a recovery period of over 360 days.” Brown is considered one of the pioneers of regenerative farming, and his farm is a flourishing model. “These strategies have allowed the health of the soil, the mineral and water cycles to greatly improve. In other words, the natural resources have benefited. This results in increased production, profit, and a higher quality of life for us. We are moving toward sustainability for not only ours, but future generations as well,” the website states.

And the sequestration solution is not just for agriculture. A new study in the journal Science Advances found that better management of forests, grasslands, and soils in the United States could remedy as much as 21 percent of the country’s annual greenhouse gas emissions.

“Done correctly,” Tickell says in his book, “the numbers suggest we could sequester most if not all of the CO2 that has been emitted by humanity thus far. … It would not absolve us of having to end the use of coal and petroleum-based fuels … but by using the restorative power of nature, it might give us a chance at a future that keeps a majority of Earth’s ecosystems intact.”

Some experts believe the effect may be more marginal, pointing out that global warming is leading to more wildfires, and more wildfires lead to more carbon in the atmosphere. And the pressure of feeding growing populations can lead to more deforestation, more chemicals, more acres of natural land being converted for industrial farming. Outcomes will depend not only on how many farmers and states get on board, but on consumption patterns: how people eat, drink, and shop.

For this reason, Kiss the Ground regularly holds “soil advocate” trainings both at its Venice offices and online, gatherings of people who want to learn more about the connection between soil and climate. Given the potential for carbon sequestration in agriculture, there is a lot of discussion about food choices.

One of the group’s practical guides starts with “Know your food source.” Some of the information is common sense: Eat what’s in season, whole foods instead of processed foods, grow your own, and compost. And some advice is controversial: “If 50 percent of the world’s population ate 2,500 calories per day and reduced meat consumption overall, then an estimated 26.7 gigatons of emissions could be avoided from dietary change alone.”

People taking the training are often surprised to find out that sustainable ecological farming—and healthy soil—actually thrives when cattle graze the land. Matthew and Terces Engelhart, founders of the popular vegan chain Café Gratitude and parents of Kiss the Ground co-founder Ryland ­Engelhart, keep chickens and cattle on their farm in Northern California, dubbed the Be Love Farm. After 40 years as vegetarians, they decided to eat the meat from their own farm. The ­Engelharts’ switch caused an outcry among the vegan community; they even received death threats.

Tickell and other Kiss the Ground advocates say the issue is less a question of whether to eat meat, but what kind. “Fewer still know that conventionally farmed food requires 3 pounds of toxic chemicals per American per year. And even fewer know that the process of growing organic produce requires the deaths of vast numbers of animals. Our choice for the future of food therefore is not vegan versus paleo versus omnivore versus vegetarian,” Tickell writes in his book. “Rather, we must choose between a food system that honors and respects the lives of flora, fauna, planet, and people versus a system that demoralizes, dehumanizes, and destroys our biological commons.”

For Tickell and so many others, it’s a down-to-earth solution.

Michaela Haas wrote this article for The Dirt Issue, the Spring 2019 edition of YES! Magazine. Michaela is a solutions journalist and the author of Bouncing Forward: The Art and Science of Cultivating Resilience (Atria). Follow her on Twitter @MichaelaHaas. 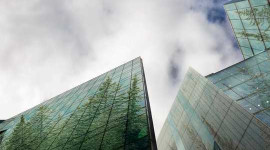 Climate Change Should Be Part Of Regular Savings And Investment Decisions 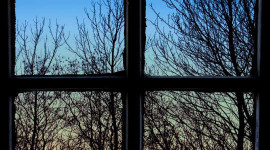 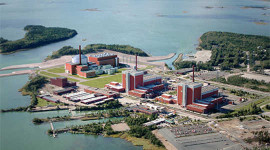 Is Nuclear Power Our Energy Future Or A Dinosaur In A Death Spiral? 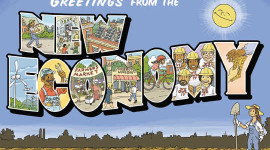 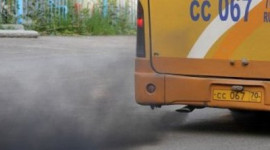 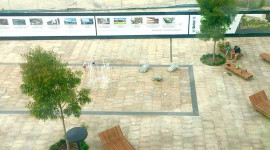 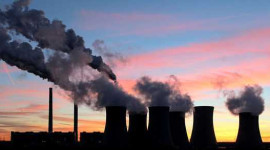 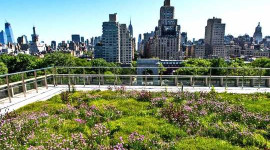