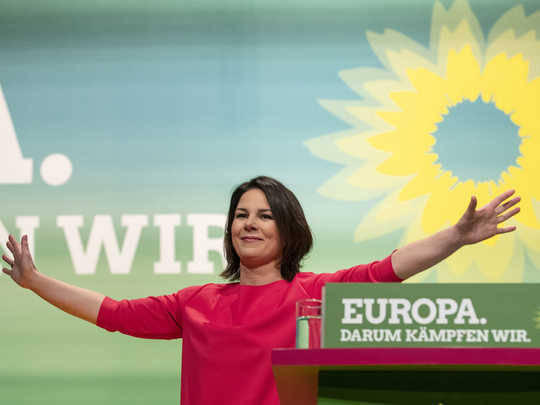 A green wave has flooded Europe in the 2019 European elections. The big winners of the night were the German Greens, who took 20.5%. of the national vote, almost doubling their 10.7% share from 2014. This best ever result is even more significant given the exceptionally high turnout in Germany of 61.4%.

The German Greens will now be represented by 21 MEPs – ten more than in the last parliament. Meanwhile, the Social Democrats (SPD) suffered a historic defeat, losing 12 of their MEPs. The Christian Democrats (CDU/CSU) lost five.

These staggering pro-Green results in the European elections have firmly put environmentalism on the political agenda within both Germany and Europe. The once dominant European Parliament party groups of the centre right and the centre left have lost their majority, which means the Green bloc could become kingmakers. Both sides will need support from the Greens to create broad pro-EU majorities, giving the group a strengthened hand to push for real, European, ecological change.

In eight months of PhD fieldwork on the Greens in Berlin, Kiel and Stuttgart, I have some observations about how the party has transformed to become the main political challenger in Germany – a country known best for its economy and car manufacturers.

The German Greens have no doubt benefited from their perceived competence on climate change and increased awareness of the need for proactive environmental protection. But they are also deliberately repositioning themselves as a real alternative to the parties of government. And the approach seems to be working. The party welcomed more than 10,000 new members in 2018 alone, a figure that continues to rise.

The Greens have further cemented their status by taking strong positions on issues beyond the environment. They are emphatically pro-Europe, and anti-racism and the far right.

During my fieldwork, I found that this issue has been just as important as climate change for those joining the party. Membership numbers started to rapidly increase, for instance, as the far-right Alternative for Germany (AfD) entered the national parliament. Rather than pander to the AfD’s anti-immigration rhetoric, as other political parties have done, the Greens have taken a very adversarial approach to the newcomers.

When the AfD made a formal complaint to parliament in February 2018 about a speech by National Green MP Cem Özdemir accusing the AfD of racism and censorship, Green politicians hit back. Green MEP Sven Giegold collected instances of AfD politicians being racist and Islamophobic so that the party could put forward its own complaint to the same all-party parliamentary committee and then published them on his website.

This positioning of the party as an alternative happens on the streets as much as in institutions. The German Greens unapologetically mobilise within movements that oppose the AfD and racism, such as the “Europe for All” march that campaigned for a Europe free from the far right. They also support groundbreaking ecological movements, from campaigns to phase out coal to the recent #FridaysForFuture school strikes for climate, inspired by environmental activist Greta Thunberg.

Meanwhile, the CDU and SPD – the two traditionally catch-all parties of Germany – are perceived to have taken little action on climate change during their time in a grand coalition government. They appear to have been punished for this at the polls, with both parties losing vote share to the Greens in the EU elections in comparison with the vote shares achieved during the last German general election.

The German Greens also seem to be the only party to have successfully undertaken reform strategies since the general election of 2017. Party members elected new party co-leaders Robert Habeck and Annalena Baerbock in January 2018, who appear to have stopped infighting between leftist and reformist party wings.

Meanwhile, infighting continues unabated in the CDU and SPD. The CDU is plagued by those calling for a shift to the right after Angela Merkel’s tenure as chancellor comes to an end. And the leader of the SPD youth wing, Kevin Kühnert, has made his name by openly criticising his own party’s role in the grand coalition.

The European elections saw the Greens perform overwhelmingly well in cities and in western states. The affluent state of Baden-Württemberg is run by a majority Green coalition, headed by prime minister Winfried Kretschmann, and the state capital, Stuttgart, has a Green mayor, Fritz Kuhn. Despite the controversial introduction of a one-year provisional diesel ban in Stuttgart at the start of this year, the Greens managed to increase their vote share in the municipal elections held alongside the EU elections. The Greens are now the largest party in Stuttgart, ahead of the former leaders, the CDU. This increased trust of green politics in the affluent west could be seen in the party’s similarly strong showing in the state elections in wealthy Hesse and Bavaria last October.

However, in eastern states, where economic deprivation and political dissatisfaction are much higher, the Greens struggle to break through in the same way. Despite coming second only to the CDU overall in the European elections, the Greens have scored much lower vote shares in areas of Germany that used to belong to East Germany, with only a few, metropolitan exceptions.

With some of these eastern states due to have state elections later this year, this will be an interesting test for the #GreenWave. Whether they prove successful or not in these regional votes, this European electoral success could lead to the Greens playing a big role in the next national government coalition negotiations. We could see the return of the Greens as a junior coalition partner after 16 years in opposition, this time with the CDU, or as the leading party in a left-coalition with the SPD and The Left Party.

If the Greens maintain their position as Germany’s second party ahead of the SPD, this coalition could even mean that Germany could have a Green chancellor in the not too distant future. Not bad for a supposedly “one-issue” party.