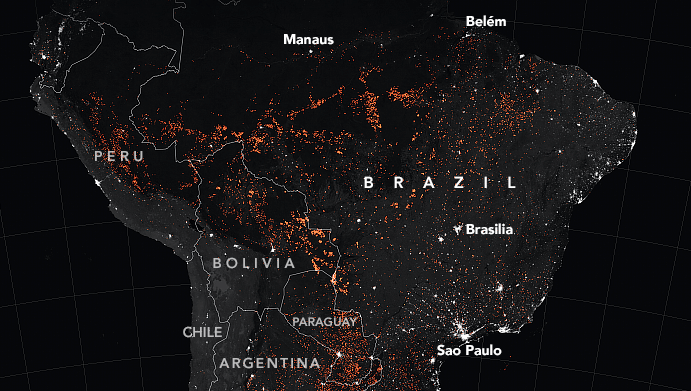 Satellite mapping of the devastating fires that swept through the rainforest in August last year.
Image: NASA Earth Observatory/Joshua Stevens

Brazilian rainforest expert warns that increased deforestation under President Bolsonaro’s regime is having a catastrophic effect on climate.

Antonio Donato Nobre is passionate about the Amazon region and despairs about the level of deforestation taking place in what is the world’s biggest rainforest.

“Just when I thought the destruction couldn’t get any worse, it has,” says Nobre, one of Brazil’s leading scientists who has studied the Amazon – its unique flora and fauna, and its influence on both the local and global climate – for more than 40 years.

“In terms of the Earth’s climate, we have gone beyond the point of no return. There’s no doubt about this.”

For decades, he has fought against deforestation. There have been considerable ups and downs in that time, but he points out that Brazil was once a world-leader in controlling deforestation.

“We developed the system that’s now being used by other countries,” he told Climate News Network in an interview during his lecture tour of the UK.

“Using satellite data, we monitored and we controlled. From 2005 to 2012, Brazil managed to reduce up to 83% of deforestation.”

Then the law on land use was relaxed, and deforestation increased dramatically – by as much as 200% between 2017 and 2018.

It’s all become much worse since Jair Bolsonaro became Brazilian president at the beginning of last year, Nobre says.

“There are some dangerous people in office,” he says. “The Minister of Environment is a convicted criminal. The Minister of Foreign Affairs is a climate sceptic.”

Nobre argues that Bolsonaro doesn’t care about the Amazon and has contempt for environmentalists.

His administration is encouraging the land grabbers who illegally take over protected or indigenous tribal land, which they then sell on to cattle ranchers and soybean conglomerates.

For indigenous tribes, life has become more dangerous. “They are being murdered, their land is being invaded,” Nobre says.

In August last year, the world watched as large areas of the Amazon region – a vital carbon sink sucking up and recycling global greenhouse gases – went up in flames.

Nobre says the land grabbers had organised what they called a “day of fires” in August last year to honour Bolsonaro.

“Half of the Amazon rainforest to the east is gone . It’s losing
the battle, going in the direction of a savanna.”

“Thousands of people organized, through WhatsApp, to make something visible from space,” he says. “They hired people on motorbikes with gasoline jugs to set fire to any land they could.”

The impact on the Amazon is catastrophic, Nobre says. “Half of the Amazon rainforest to the east is gone – it’s losing the battle, going in the direction of a savanna.

“When you clear land in a healthy system, it bounces back. But once you cross a certain threshold, a tipping point, it turns into a different kind of equilibrium. It becomes drier, there’s less rain. It’s no longer a forest.”

As well as storing and recycling vast amounts of greenhouse gas, the trees in the Amazon play a vital role in harvesting heat from the Earth’s surface and transforming water vapour into condensation above the forest. This acts like a giant sprinkler system in the sky, Nobre explains..

When the trees go and this system breaks down, the climate alters not only in the Amazon region but over a much wider area.

“We used to say the Amazon had two seasons: the wet season and the wetter season,” Nobre says. “Now, you have many months without a drop of water.”

Nobre spent many years living and carrying out research in the rainforest and is now attached to Brazil’s National Institute for Space Research (INPE).

The vast majority of Brazilians, he says, are against deforestation and are concerned about climate change – but while he believes that there is still hope for the rainforest, he says that time is fast running out.

Many leading figures in Brazil, including a group of powerful generals, have been shocked by the international reaction to the recent spate of fires in the Amazon and fear that the country is becoming a pariah on the global stage.

Nobre is angry with his own government, but also with what he describes as the massive conspiracy on climate change perpetrated over the years by the oil, gas and coal lobbies.

Ever since the late 1970s, the fossil fuel companies’ scientists have known about the consequences of the build-up of greenhouse gases in the atmosphere.

“They brought us to this situation knowingly,” Nobre says. “It’s not something they did out of irresponsible ignorance. They paid to bash the science.” – Climate News Network

Jessica Rawnsley is a UK-based environmental journalist. She has written stories on the Extinction Rebellion movement and police tactics connected with demonstrations. She has a particular interest in campaigning groups and their influence on government climate policies. 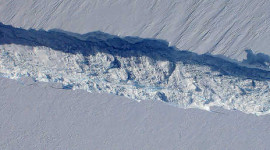 How Close Is The West Antarctic Ice Sheet To A Tipping Point? 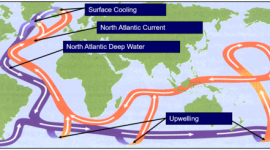 Could The Atlantic Overturning Circulation Shut Down? 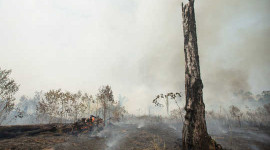 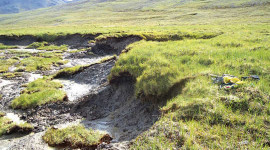 The Irreversible Emissions Of A Permafrost Tipping Point