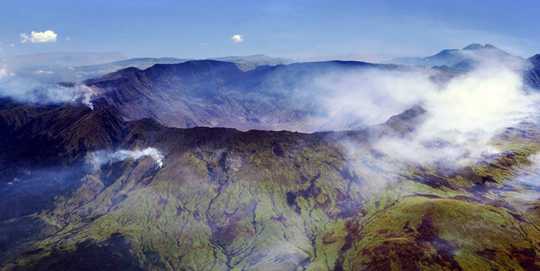 The day in 1815 when the world’s climate went berserk was only the start of months and years of global climate disruption and social unrest.

If you had been in what were then called the Dutch East Indies on 10 April 1815, the day would have been etched indelibly on your memory: it was the day the global climate went berserk.

Many parts of the world are already feeling the effects of a changing climate. Island nations in the Pacific are seeing their lands eaten away by rising sea levels.

Whole communities of people in Arctic regions are threatened by rapidly expanding ice melt. The foundations of houses are being swept away. Traditional hunting grounds are being lost.

Wolfgang Behringer is a climate historian who seeks to draw parallels between what is going on now and events long ago. In particular Behringer, a professor of early modern history at Saarland University in Germany, looks at how changes in climate can influence and shape events – political, economic and social.

In a new book he focuses on the 1815 volcanic explosion of Tambora, on the island of Sumbawa in present-day Indonesia. The eruption still rates as the largest in human history; the cloud that burst from the volcano reached a height of 45 kilometres.

“Apparently minor changes in temperature and humidity suffice to shake up entrenched ecosystems, but above all entrenched agricultural systems”

Many thousands of people were killed on Sumbawa and adjoining islands, including Lombok and Bali. Dust clouds from Tambora were swept around the globe; the world’s climate went berserk, says Behringer.

“The dimensions of the Tambora crisis were so extraordinary because its roots lay in nature, in processes of geology, atmospheric physics and meteorology. These forces of nature respect no borders.”

The suspended particles from the volcano reduced solar radiation and led to global cooling. What scientists call a dry fog enveloped much of Asia. A blue sun appeared in Latin America. Snow that fell in Italy was red and yellow.

The winter of 1815/16 in much of the world was one of the coldest of the century. In Europe, 1816 became known as the year without summer. In North America what was described as the “Yankee chill” resulted in the worst harvest ever recorded.

Torrential rains caused floods and thousands of deaths in China and India. Famine was widespread.

Behringer says the changes in climate provoked social unrest on a worldwide scale.

“The reactions to the crisis offer an example of how societies and individuals respond to climate change, what risks emerge and what opportunities may be associated with it”, he writes.

Epidemics broke out. In 1817 the cholera pathogen appeared for the first time. In India alone it’s believed 1.25 million died of the disease each year for more than a decade following the Tambora explosion. The suffering led to uprisings against British colonial rule in India and Ceylon, today’s Sri Lanka.

In Ireland, Scotland and Wales people rioted as grain prices soared. In England the authorities became concerned at a rise in revolutionary activity. Prisons filled up.

The years following 1815 were a time of mass migration. Hundreds of thousands of people in Europe, in an effort to escape hunger, travelled across the Atlantic to the US and Canada. Within the US there was a movement westwards towards California, which had largely escaped the more severe effects of the eruption.

There were other, less dramatic consequences. Behringer says Tambora inspired a new-found preoccupation with weather and climate phenomena. Not surprisingly, it spurred the emergence of the science of volcanology.

Establishing the cause and effect of changes in climate – whether caused by volcanic eruptions or by the burning of fossil fuels and the increasing amounts of greenhouse gases in the atmosphere in consequence – is an extremely tricky business.

Behringer makes the point that not all of the events of 1815 and subsequent years can be directly attributed to Tambora. But the explosion did act as a catalyst.

The eruption was a single event and its after-effects were not permanent though, for a limited period, the world’s ecological framework was altered.

“Apparently minor changes in temperature and humidity sufficed (and still suffice today) to shake up entrenched ecosystems, but above all entrenched agricultural systems.

“And without their daily bread, people can very quickly become angry. In such situations it is clear – even in absolutist monarchies or dictatorships – who the sovereign is.” − Climate News Network