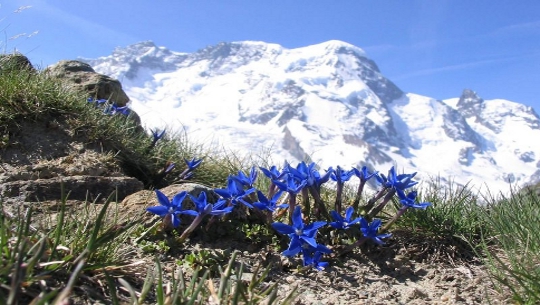 Many alpine flowers could soon fade out. Some bees may be buzzing off. The wild things are victims of climate heat.

Thanks to climate heat, this could be the last farewell to mossy saxifrage, to alpine wormwood and mignonette-leafed bittercress. With them could go plants most people could hardly name: dwarf cudweed, alpine stonecrop, mossy cyphel, cobweb houseleek and two kinds of hawkweed. All of them are mountain-dwellers, hardy little plants that depend for their existence on alpine glaciers.

And almost everywhere in the world, high-altitude rivers of ice are in retreat. Global heating, climate change and human disturbance alter both the conditions for growth and the rich variety of life.

In the same week that one team of researchers listed the alpine flowers threatened with extinction, another team of scientists assembled an inventory of observations of wild bees, to find that a quarter of the world’s 20,000 bee species have not been recorded in the last 25 years.

Bees and flowers are interdependent: they evolved together and would perish together. But climate change threatens to take a selective toll on a range of alpine plants − beloved of gardeners but also important in liqueurs and medicines − as glaciers retreat in the mountainous regions.

These little flowers are to be found variously in the Sierra Nevada in Spain, the Apennines in Italy, along the spine of the Alps in Switzerland and Austria, and even in the highlands of Scotland.

And one day, according to a new study in the journal Frontiers in Ecology and Evolution, many or all of them could be locally extinct.

“Something is happening to the bees, and something needs to be done … The next step is prodding policymakers into action while we still have time. The bees cannot wait”

Californian researchers report that they looked at 117 plant species and matched them with geological evidence from four glaciers in the Italian Alps, and then used computational systems to calculate how plant communities have changed over the last five thousand years, and what might happen as the glaciers continue to retreat.

They found that as the glaciers disappear, more than one in five of their sample alpines could also vanish. The loss of that 22% however could be to the benefit of around 29% of the surveyed species, among them the snow gentian, Gentiana nivalis and the dwarf yellow cinquefoil Potentialla aurea. Some alpines would probably not be affected: among them alpine lovage or Ligusticum mutellina and Pedicularis kerneri, a variety of lousewort.

The authors make no mention of one alpine almost everybody in the world could name: Leontopodium nivale or edelweiss. But what happens to even the most insignificant wild plants matters to everybody.

“Plants are the primary producers at the basis of the food web that sustained our lives and economies, and biodiversity is the key to healthy ecosystems − biodiversity also represents an inestimable cultural value that needs to be properly supported,” said Gianalberto Losapio, a biologist at Stanford University in the US.

Meanwhile in Argentina researchers decided to take advantage of citizen science to check on some of the flower world’s biggest fans, the wild bees. There has been huge concern about observed decline in insect abundance, as wild ecosystems are colonised by humans and global average temperatures rise to change the world’s weather systems.

But over the same decades, there has also been a dramatic increase in informed interest in the wild things, among gardeners, bird-watchers and butterfly lovers, and an exponential rise in records available to an international network of databases called the Global Biodiversity Information Facility.

And, say researchers in the journal One Earth, as global records soar, the number of bee species listed in those records has gone down. Around 25% fewer species were recorded between 2006 and 2015 than were listed in the 1990s.

Wild bees have a role in the pollination of about 85% of the world’s food crops. Without the bees, many wild flowers could not replicate.

“It’s not exactly a bee cataclysm yet, but what we can say is that wild bees are not exactly thriving,” said Eduardo Zattara, a biodiversity researcher at CONICET-Universidad Nacional del Comahue.

“Something is happening to the bees, and something needs to be done. We cannot wait until we have absolute certainty because we rarely get there in the natural sciences. The next step is prodding policymakers into action while we still have time. The bees cannot wait.” − Climate News Network